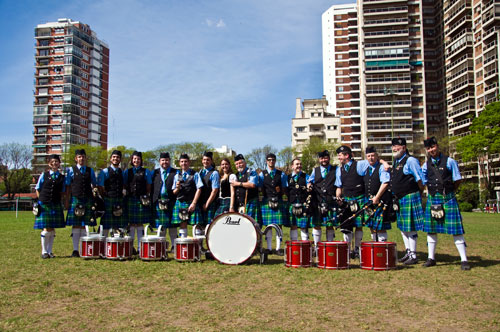 On Friday evening a Massed Pipe Bands Parade was held by all who participated. All Bands marched through downtown Buenos Aires, causing astonishment and admiration from all those watching. There were approximately 150 pipers and drummers playing in unison, pulling a crowd & with many followers. A wonderful event that made headlines in Buenos Aires newspapers the next day. In the evening a “Welcome Party to the G4” was held, all bands participating and included the presentation of the Canadian judges invited for the event.

On Saturday the championship was held with the presentation of all bands and dancers. We were the first band to perform and got a great response from the crowd. We played well but , of course , had to wait for all the other seven bands to perform.

After all bands had played – we were awarded 3rd place overall, taking home 3 cups for Piping, Drumming & Ensemble. A great result for the first year of the band, even though being the first Band to perform and then in front of strong Argentinean supporters… But we did well.

A tough road lies ahead of us and we are working hard on our Piping , Drumming & Ensemble so as to improve our performances, and perform well.

In April 2012 the “5th.Gathering of South American Pipe Bands” will be held in Sao Paulo, and again we’ll have the opportunity to represent Brazil & ” The St. Andrew Society of the State of Sao Paulo” in the biggest event of its kind in Latin America